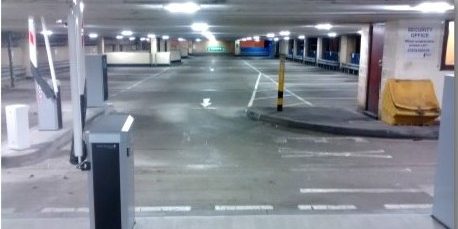 Herschel Car Park is the largest public car park in Slough town centre. The car parkÂ has eleven levels; seven providing 450 public spaces, the remaining four areÂ managed by Slough Borough Council for the businesses based in ObservatoryÂ House, one of which is the famous Yellow Pages head office.

The car park was built in the mid 1980s and has had very little refurbishment other thanÂ reactive maintenance. The original lighting was replaced between 1997 andÂ 2003 to a combination of 100W SON light fittings and fluorescent units. The lightingÂ had no control other than a single on/off switch for the whole car park. The lightsÂ therefore remained on 24 hours a day. The installation provided for three areasÂ within the car park:

Polyteck installed a new LED lighting system which allowed for full control of lightingÂ on each level. Levels could be placed on a timer to match use, a facility ofÂ particular important for the privately let areas. The LED lighting units were furtherÂ controlled by motion detectors to enable the lighting to be dim to 50% whenÂ dormant. The combination of controls and the reduced wattage LEDs provided anÂ 80% saving in the car parks electricity consumption.

The work was undertaken as a phased programme, which meant the car park couldÂ remain open with minor disruption to half of each floor as work was being carried. Polyteckâ€™sÂ flexible deliveries also saw â€˜out of hoursâ€™ work further reduce the disruption enabling Slough Borough Council and local residents to continue using the car park duringÂ the busy run up to Christmas.